These bread-less portobello mushrooms are packed with fresh flavours because each delicious bite is gluten-free, low carb and spectacular.
That's right, you don't need any bread!
Portobello mushrooms are the perfect side filled with nothing else but lightly cooked fresh herbs, onion, garlic, fresh ginger and pine nuts, then baked to a golden-warm healthy deliciousness.
Jump to Recipe Print Recipe

Are you ready to try one of my favourite side dish recipes?

These bread-less portobello mushrooms are packed with fresh flavours because each delicious bite is gluten-free, low carb and spectacular.
That’s right, you don’t use any bread!

Portobello mushrooms are the perfect side dish filled with nothing else but lightly cooked fresh herbs, onion, garlic, fresh ginger and pine nuts, then baked to a golden-warm healthy deliciousness.

If you have not tried this recipe on your family or guests before, you’re in for a pleasant surprise.
Not only are they easy to make ahead of time but they are also uncomplicated. One mushroom for one guest . . .  as simple as that.
Unless of course, you can’t resist having a few extras for reheating the next day!

5 Reasons Why I Love This Recipe 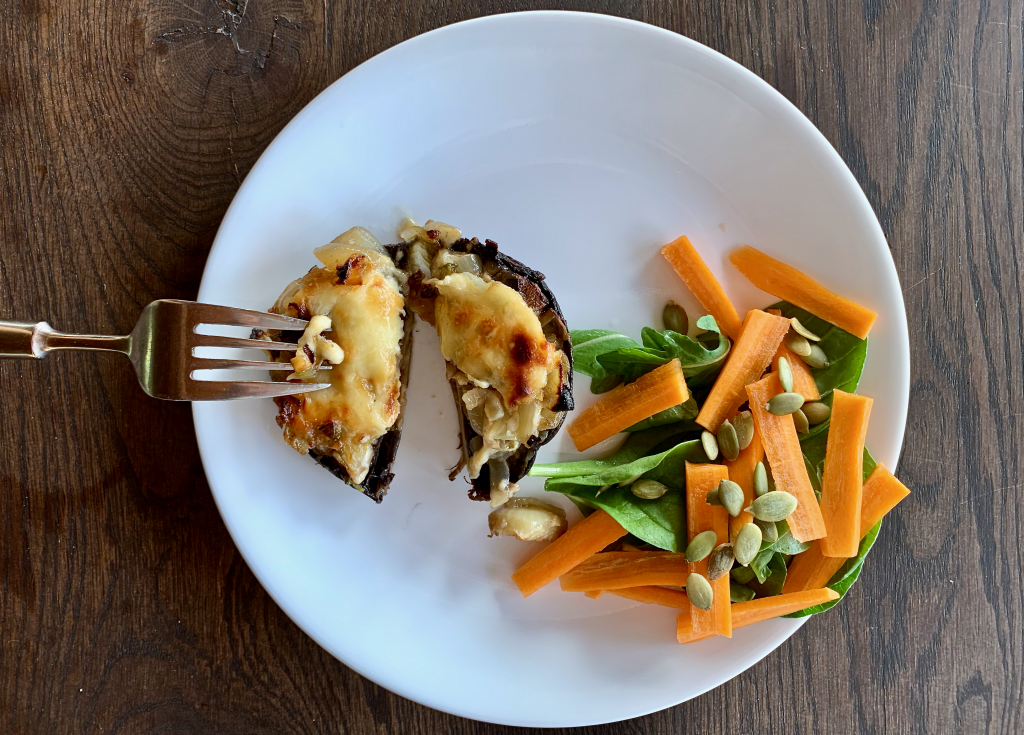 Probably the best reason for making this recipe is: you can customize!

Here’s how:
Don’t like a lot of cheese?
No problem – claim one of the mushroom caps as yours and sprinkle the others with more.

If you love parmesan while your other half adores mozzarella – that’s so easy with this recipe.
You can do the same with a vegan cheese as well.

You can even get down to the details.
Perhaps you prefer your mushroom caps with less stuffing.
Meanwhile your partner wants theirs piled high, but not with pine nuts . . .

No problem! Here’s what you do: divide the herb-onion mixture and, like a pizza add the extras to custom order.

Pine nuts will make your mushrooms taste creamier while pumpkin seeds add an earthy crunch.
Both are delicious for different reasons.

Talk about some serious win-win versatility with this dish.

And, when everyone loves stuffed mushrooms, you’ll eat them more often.

We all know mushrooms have no leaves or flowers and don’t produce any fruit. That’s because they are in fact, the fruit of the fungus.

They first appeared in french cuisine and by the late 1800’s Americans were also adding mushrooms to their dishes.

Today, we have at least 7 common varieties to choose from; the Crimini (brown), Enoki, King Oyster, Oyster, Portabella, Shitake, and White Button mushrooms.
And just in case you wanted to know what the most expensive mushroom is; it’s the heavenly yet rich aromatic truffle, also known as the “diamond of the kitchen.”

Then there are the intriguing mushrooms.
Have you heard of Lion’s Mane, Brain mushroom and mushrooms that glow in the dark?
And then – fun kid alert! – there’s the Dung Canon mushroom known for its ability to accelerate faster than a rocket!
Or what about the Reishi mushroom, so strong that it was used to make the bricks that built the towers at Manhattans’ MoMA PS1 (Museum of Modern Art).
WOW! A mushroom that is even stronger than concrete!

That’s quite impressive but let’s get back to the recipe, guaranteed much tastier than concrete will ever be.

How To Store And Prepare Fresh Mushrooms

Use your mushrooms as soon as possible once you have them in your kitchen. Keep them in a brown paper bag, refrigerated and away from air and sun as this dries out the fine gills responsible for all of those earthy flavours.

Cultivated fresh mushrooms do not need peeling, especially if you are stuffing or broiling them. Their tough yet thick skin not only helps keep a mushroom together as it cooks but adds the more delicate woodsy flavours you may prefer in a light pasta dish or salad.

If you must wash your mushrooms, place them in a colander.
Run a gentle stream of cool water over the mushrooms, for no longer than 2-3 seconds, while you toss them.
Any longer and you’ll bruise and crush the delicate fins or gills found underneath making the mushrooms turn dark brown when cooked.
For some dishes, this is disappointing.

Pat each mushroom dry and use immediately.
If you’re sauteing mushrooms, allow them to completely dry before you begin.
I find commercial mushrooms need a quick wipe with a slightly damp paper towel to brush away any soil.

What Else You Can Use Mushroom Stems For

Mushroom stems are amazing – keep them and use them.
Do not compost or toss the stems out as their delicate taste creates the most amazing Duxelles mushroom spread.
Or, add finely chopped mushroom stems to your sauce or simmering stockpot.

One of my favourite things to do when working on a recipe with a large variety of vegetables is to pop any vegetable scraps into a bag and into the freezer until I have enough to make a stock.
While cooking for one meal you’re also preparing for the next with minimal effort.

How To Make a DIY Vegan And Vegetarian Stock With Mushrooms

2. Stir until everything is evenly mixed and fragrant before adding 5-6 cups of water.

4. Check your fridge for forgotten soft vegetables and herbs. Include herb stems as they also have flavour.

5. Add a teaspoon of chilli flakes and two bay leaves if you like and turn the heat to MEDIUM-LOW.

5. With the lid on, simmer your stock for 45- 60 minutes before turning the heat off.
Allow vegetables and herbs to sit in the hot stock.

6. Once cool, pour the liquid through a colander into a large, deep bowl.

7. Discard and compost the vegetables. Wash and dry your stockpot, add the stock liquid back and bring to boil on MEDIUM-HIGH. Allow liquids to boil until reduced by half. This concentrates the flavour and makes it easier to freeze one bag of concentrated stock instead of 2 bags of diluted stock.

8. Allow the concentrated stock to cool before pouring into labelled resealable bags. Lay on a flat surface in the freezer so the stock bags freeze with smooth sides. Once frozen re-stack frozen stock bags in a cardboard box to prevent freezer burn.

You may be wondering why I gave you a stock recipe when this is supposed to be all about mushrooms.
Well, Stuffed Mushroom Day is shared alongside Homemade Soup Day on February 4th, so I couldn’t resist!

How to Make Your Gluten-Free Herb Stuffed Portobello Mushrooms​

Top Tip:
For this recipe, I always use aluminium foil and create a two-layered tray with scrunched up edges.

Instructions (kid-friendly)
~ Peel off enough length of aluminium foil to hold both mushroom caps plus another 6″.
~ Peel off another of the same length.
~ Place one length on top of the other and scrunch up all sides.

Make sure you don’t scrunch down but keep the walls tall to keep your mushrooms moist while they bake. This is especially important if you are only baking one or two.

Place your aluminium tray on a regular baking tray.

Subscribe to our newsletter for updates, freebies, and more! 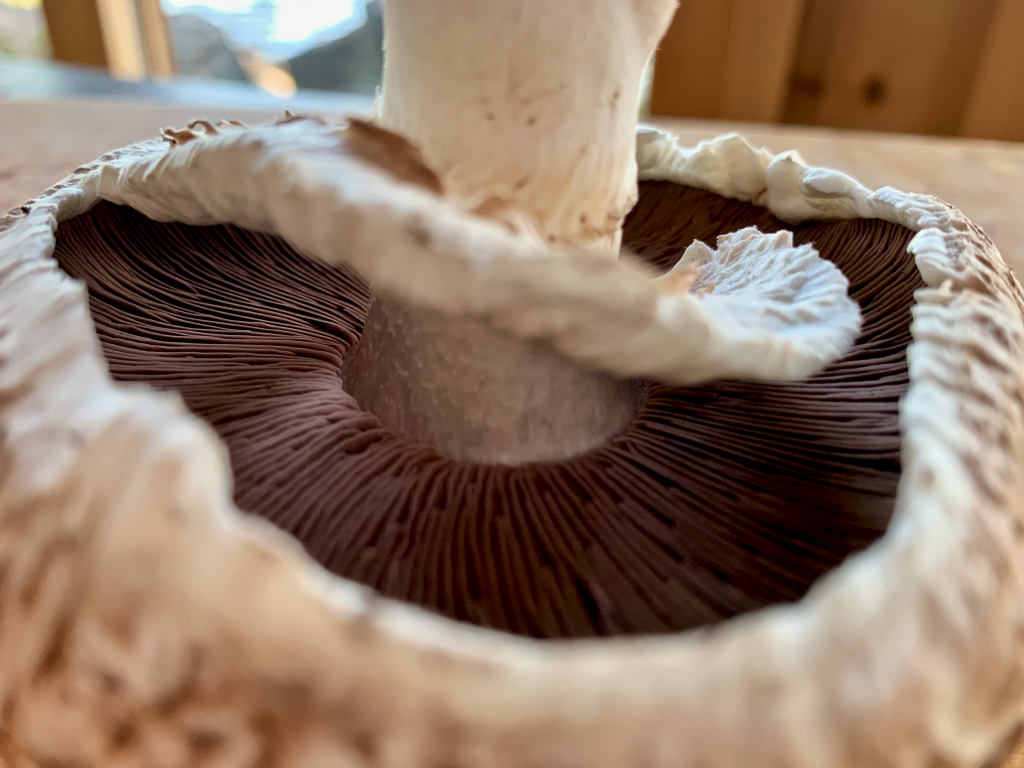 Wipe any soil away from the mushrooms and trim away the last 1/8 inch off each stem if they don’t look fresh. Compost the ends.

Tug and twist each stem away from the cap.
Finely chop the stems.

Wash and dry your fresh herbs.
With your knife, slice the leaves until fine. If your basil is beginning to seed, include the micro leaves as well.
Alternatively, keep the small, delicate leaves aside for an exquisite garnish. 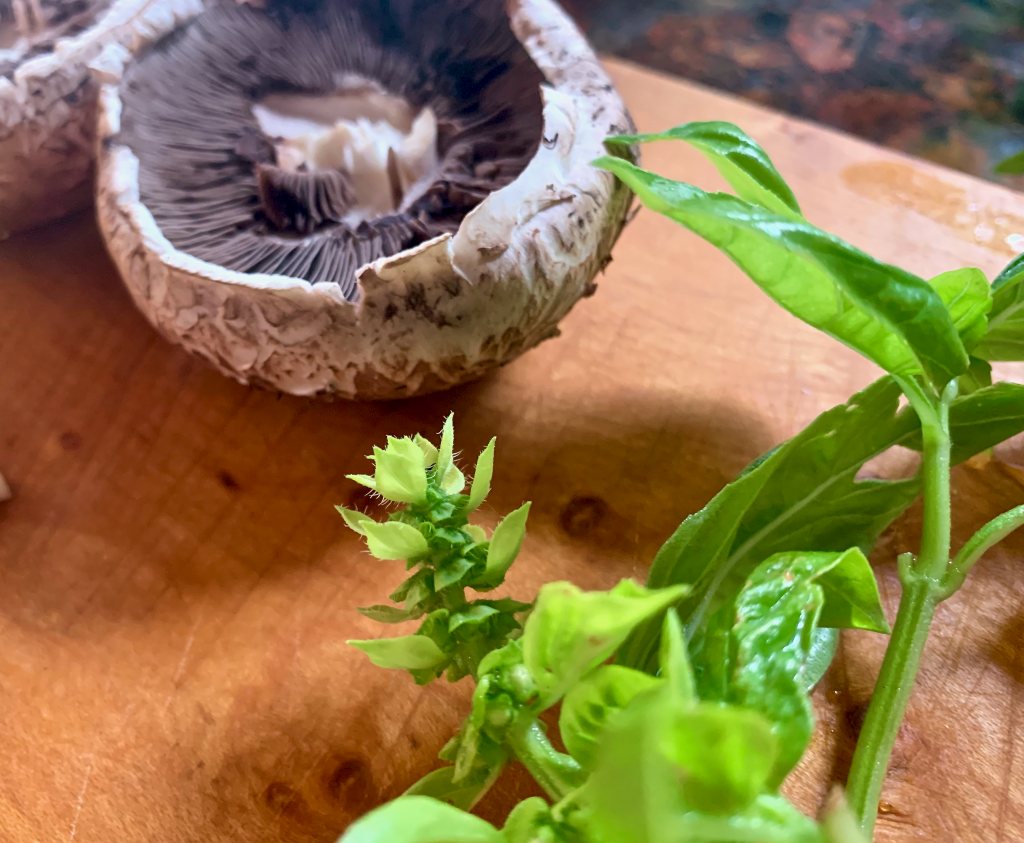 Place both mushroom caps on the oil and move them around.
Lift the caps up and check that they both have a generous coating of oil. This prevents them from sticking.

Peel and dice half an onion.
Add olive oil to a small frying pan and add the onion.
Cook on MEDIUM-LOW heat for 8-10 minutes, or until the onion turns soft and translucent.

Add grated garlic and fresh ginger. Now add the chilli flakes if you like a little more heat. Stir until mixed and cook for 1-2 minutes, or until aromatic.

Add a pinch of salt if you prefer and stir. 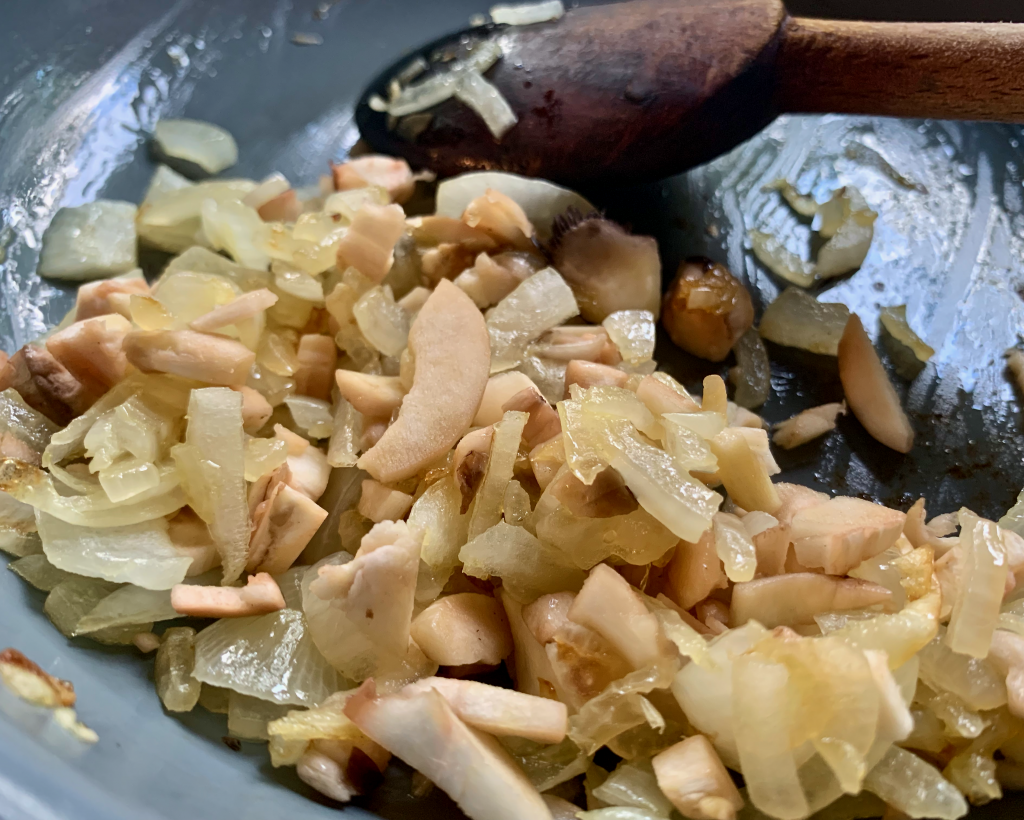 Add fresh herbs to the onion-mushroom mixture and cook for another minute or until herbs have wilted and are fragrant.

Top Tip:
Take your time in each step. You need a soft mixture that easily presses into the mushroom caps without a lot of force. 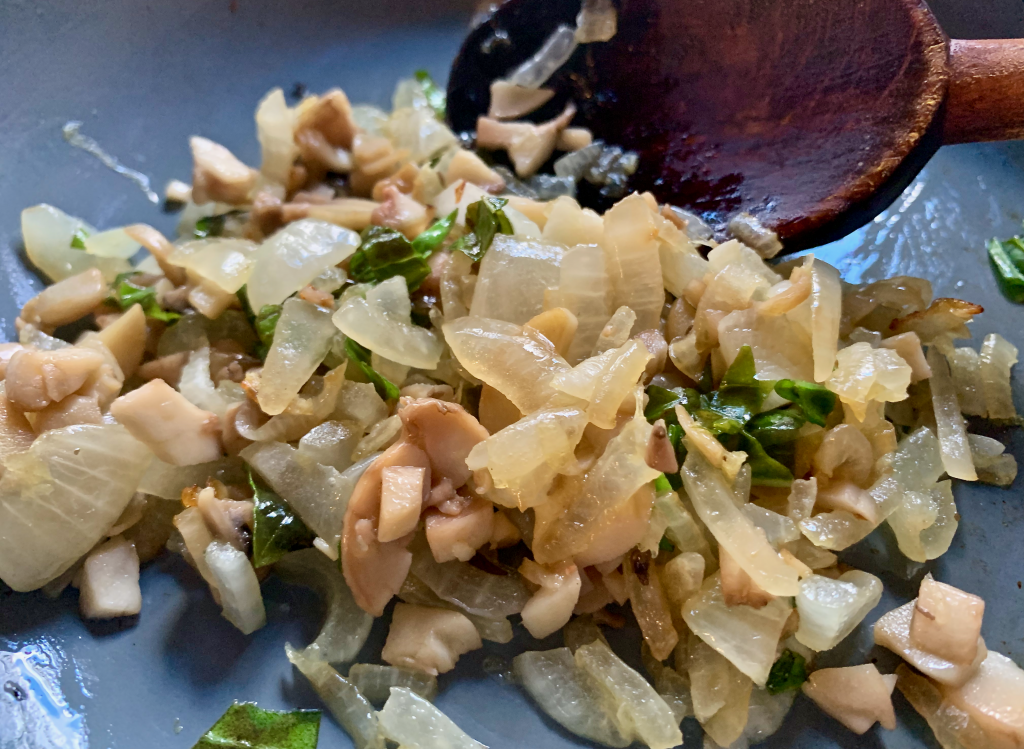 Add pine nuts or pumpkin seeds and stir until mixed then cook for another minute, or until fragrant.

Top tip:
If at each stage, you cook until you can smell the nuts and herbs, you’ve released the oils which make your mushrooms taste even more incredible.
So don’t rush this step either! 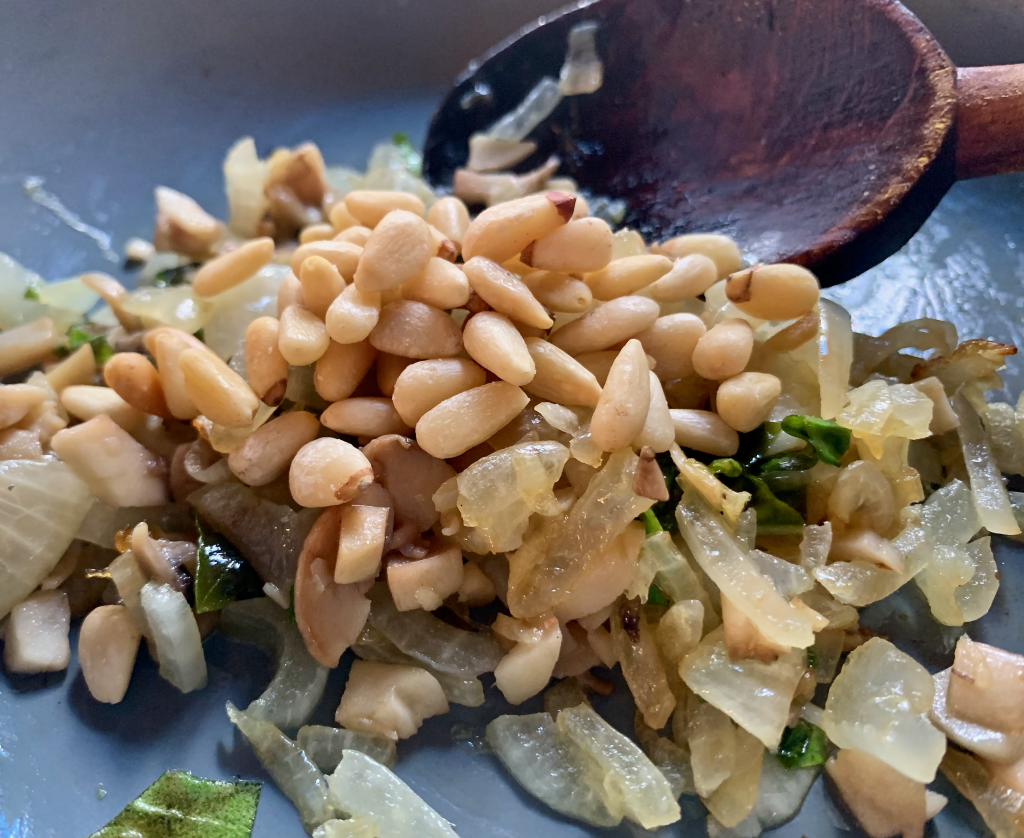 Remove the pan from the heat and spoon half of the onion-herb mixture into each mushroom cap.

Press the mixture into the mushroom cap until it is well-packed.

Top with your choice of cheese.
Here, one mushroom cap is sprinkled with parmesan, the other with cheddar.

Bake at 3350 degrees F, or 175 degrees C or Gas mark 4 for 30-40 minutes, or until the cheese has melted to a golden brown.
Garnish with finely chopped fresh herb and serve!

Top Tip:
I accidentally left mine in the oven for over an hour (below) and they both still tasted delicious.
The foil walls really do stop them from drying out!

Nuts add an extra texture and satisfy the tastebuds.

Fresh herbs are better than dried.

If you adore mushrooms to the moon and back, adding a little ground dried mushroom while cooking the onions gives your dish an extra woodsy flavour boost. 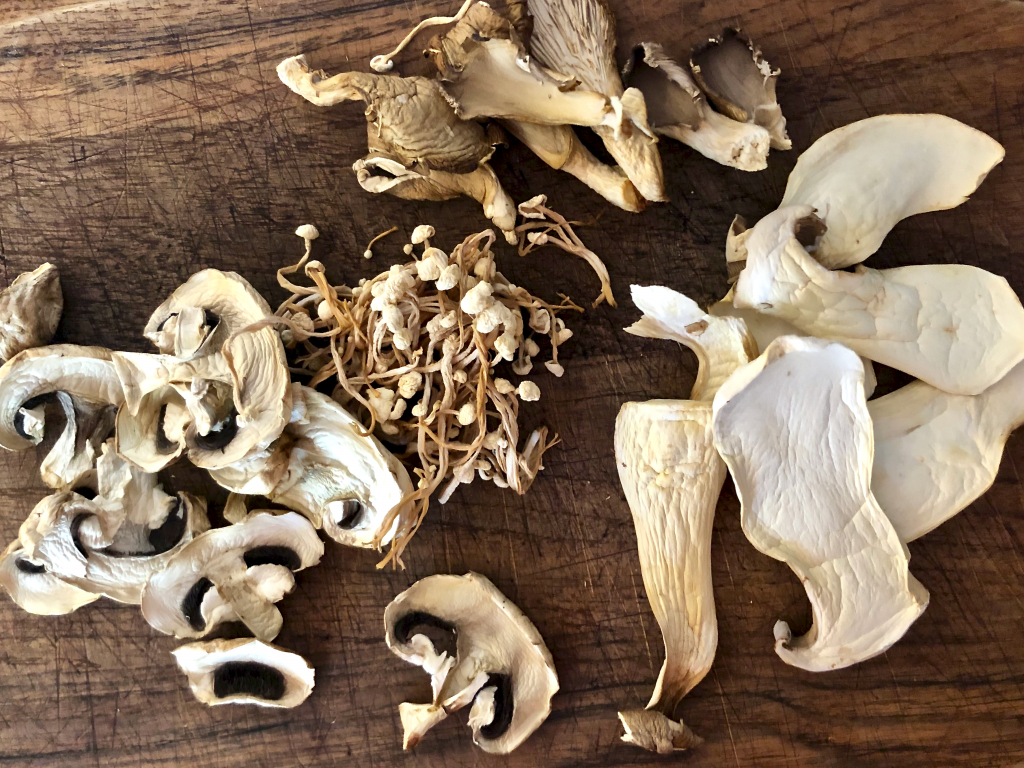 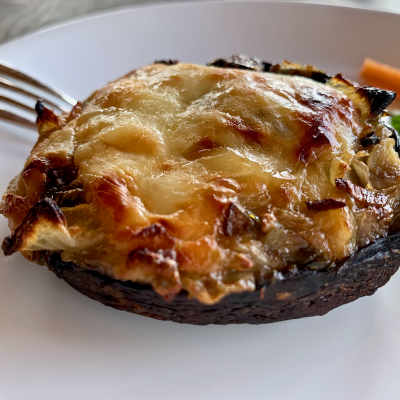 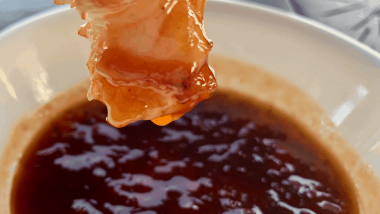 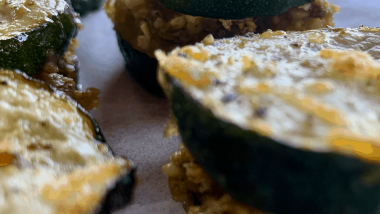