What Colour Are Your Peppercorns . . . and how to make your own spicy popcorn with one secret ingredient!

Delicious as a healthy, satisfying snack this popcorn wakes up your taste buds.
Jump to Recipe Print Recipe

Have you ever wondered if black pepper is in every kitchen in the world?
Or;  if most recipes call for black pepper, which peppercorn could you try for a change, the green, red, or white peppercorn?

Everyone knows in a split second what a black peppercorn looks, smells, and tastes like.
The black peppercorn has a rich history which I am about to share, and perhaps after reading this, you will be tempted to try the other colours as well.

History of the black peppercorn

Since the beginning of mankind, we have always traded with our neighbours, exchanging goods, services, and ideas, along with a little gossip.
And soon the more adventuresome travelled by camel farther from their homes, returning with silk, silver, spices, and tales of wonder and mystery.

The Silk Road, which linked China to Rome in a network of 4,000 miles, has a history with pepper which has been traced as far back as 2000BC.
Roman cooks have been grinding black pepper ever since the 3rd century and peppercorns were even found in the nostrils of the mummy Ramses the Great (1303-1213)!

In the second oldest known cookbook, De re coquinaria, also known as, The Art of Cooking, many recipes listed pepper in the ingredients. But . . . whether or not Caelius Apicius actually did use this spice as frequently as he states, is still debated today.
It has been suggested, back then chefs included pepper to protect their beloved trade secrets which in turn maintained their position in the household.

And . . . if they happened to write down a few extra steps, or include ingredients that only they knew to omit, then any thief would later look a fool.
The other thought is, perhaps without refrigerators to stop food from spoiling, Romans knew pepper had antimicrobial preservative properties.

Even Martha Washington used it!

When Martha married George Washington in 1749 she was given an already-old family manuscript, Booke of Cookery.
Their Pepper Cake recipe used 3 tablespoons of black pepper and was guaranteed to last up to six months!

And, if you are interested in making your own black peppercorn massage oil for aching joints or sore muscles, it’s easy to do at home.
All you’ll need is a good quality carrier oil, peppercorns, and a jar!

I get commissions for purchases made through links in this post at no cost to you. Read my full disclosure here.

Which peppercorn varieties do you know? 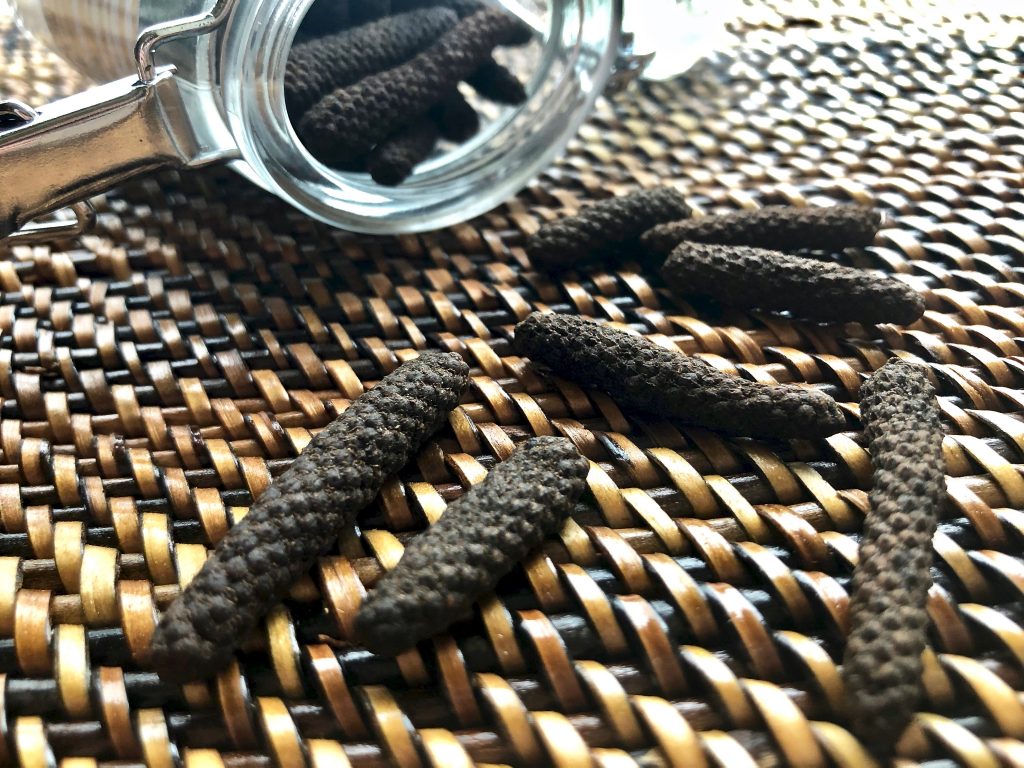 At one time Long pepper was the most valued spice in India and in Ayurveda texts can be traced back to 1000 BC.

Grown in Ethiopia, India and Indonesia and prized for fresh, sweeter hints of nutmeg, cinnamon, and cardamom, Long pepper blends easily with fruit and meat.

Although this pepper is not as well known today what I did learn is, once a cook tastes the difference, they prefer it over black pepper.
If you ever get a chance, please try Long Pepper!

Growing throughout Indonesia, Tailed pepper has woody hints of incense. Once called the ‘true pepper’ it adds a mysterious depth to sauces, meats, and chocolate that made it popular throughout Europe during the 16th and 17th centuries.
Tailed pepper fell out of fashion when black pepper became the favourite spice to use.

Although hard to find, thankfully Tailed pepper is making a cuisine comeback as cooks re-discover long-forgotten, unusual flavours.
You’ll find this pepper in dishes from North Africa’s Tunisia and in Morocco’s speciality, Ras-el-Hanout, an aromatic blend of 30 or more spices, depending on which merchant you buy from.
Next time you make your own Ras-el-Hanout you may want to try Tailed pepper.

The Piper nigrum plant is responsible for today’s popular black pepper however, it also produces the less common white, and green peppercorns that we find on shelves today.

With its woody vine holding glossy heart-shaped green leaves this plant is the happiest climbing up and around trees, poles, and trellises in hot and humid tropical countries like Brazil, Indonesia, and Malaysia.
If you are lucky and live in the southern end of USA, Hawai’i, or Puerto Rico, you might have a chance to grow your own pepper plant!

Let’s look a little closer at how this one plant, the Piper nigrum, is responsible for three different peppercorns.

Each spike of white flowers produces a string of berries, which over nine months mature and ripen, changing in colour from green to yellow to red.
Then, depending on when that berry is picked and how they are treated, you will have either green, black, or white peppercorns!

Delicate, unripe, and immature green berries are quickly dehydrated or preserved in a brine of salt and vinegar to stop the corns from perishing.
At this stage, these peppercorns have a fresh, mild flavour and are used in Thai, Southeast Asian, Indian, and French recipes, in particular, Steak Au Poivre.

If you have dehydrated green peppercorns, soak them first in stock, wine, or warm liquid for an hour before using.

Harvested when the green berries are mature, these clusters are quickly dipped in boiling water until they turn dark brown or black.
This process, known as enzymatic browning, is a chemical reaction used in the food industry to force oxidation, which enhances the flavour and acts as a natural preservative.

The berries are then sun-dried for up to two days until they wrinkle and shrink.

Love the taste but can’t take the coughing fit after?
Fine ground pepper tends to irritate our throats more so try your black pepper coarsely ground, or better yet, cracked by a pestle in a mortar!
This way your food will still have a pop of spice to it.
Use coarse cracked black pepper on anything you barbeque – most will fall off but the flavour remains.

In a process known as retting, the red berries are soaked in large vats of water for a week or more.
Bacteria disintegrates the flesh, leaving behind the creamy-white seed, which is then sun-dried for 12 hours.

Used to spice bland and white sauces and vegetables, white pepper is popular in Chinese and Thai dishes or when dark flecks are not desired . . . think mashed potato in a high-end restaurant!

White pepper is also one of the ingredients used to make your own Speculaas spice blend which is popular in baking.
Also delicious in this sourdough, ricotta spiced donut recipe.

Similar in size and shape to other peppercorns, pink and red peppercorns are not related to the green, white, or black peppercorn!

With the botanical name, Schinus terebinthifolius, these peppercorns originated in Peru but today they grow throughout Brazil, Madagascar and many southern states of USA.

Their sweeter berries are much softer and milder so use either roughly chopped or whole for a splash of colour on top of vegetables and salads.

Because the berries are soft, they are easily crushed with the side of a broad knife or a mortar and pestle – do not use a pepper or spice grinder.

They make an exquisite, fruitier change from black pepper.

On a 1-10 scale for heat, pink and red peppercorns score a delicious, mild 3.

*As red and pink peppercorns are related to the cashew tree, use with caution if anyone has a NUT ALLERGY!

And now for a surprise recipe using Sichuan peppercorn which is not even a peppercorn!
(It just looks and tastes like one).

Sichuan is one of the spices found in five-spice powder which adds an incredible, interesting pop of flavour to homemade popcorn, made even more delicious, and gut-friendly, by cooking the kernels in coconut oil!

I don’t mind the grittiness of these seeds, but if you struggle with texture then after crushing, drop the husks into a sieve and strain out the seeds.
Note: this removes most, but not all. 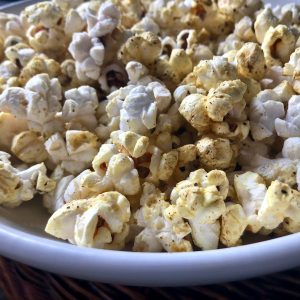 Coconut oil helps tone down the heat and adds an unexpected smoothness to these spicy kernels - something that olive oil doesn't quite manage to do.  If you do not have Sichuan pepper, omit it and rely on the Ras-el Hanout spice for flavour, because fine ground black pepper, in my opinion, is too harsh for popcorn. 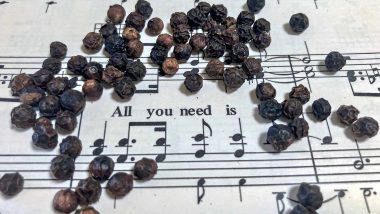 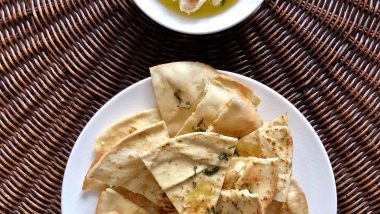